‘All paths lead to God’…or do they? 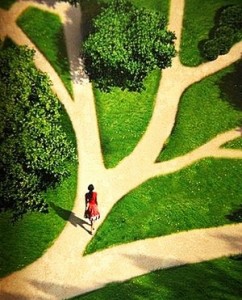 I’m sure you’ve heard, as I have, the oft repeated phrase, ‘all paths lead to God,’ or ‘all religions are fundamentally the same and have the same goal, leading one to God.’ In the pluralistic societies in which we live, this ‘all paths lead to God’ philosophy is one of the crowning virtues (along with the new ‘tolerance’-but that is a topic for another time) which is affirmed in order that we can all live together in peace, be sure not to exclude or offend anyone, and by so doing, live happily ever after. However, this philosophy, or relativistic worldview, has a few particular flaws which are glaringly apparent once one actually takes the time to ask the age old question, ‘but, is it true?’ Poet Steve Turner offers the following brilliant summary of what many think when it comes to religion:

“Jesus was a good man just like Buddha, Mohammed, and ourselves. We believe he was a good teacher of morals but we believe that his good morals are really bad. We believe that all religions are basically the same, at least the one we read was. They all believe in love and goodness, they only differ on matters of creation, sin, heaven, hell, God, and salvation.”

As one can see, all religions may be wrong, but they cannot all be right. Every religion differs vastly on ‘matters of creation, sin, heaven, hell, God, and salvation,’ and as such, the law of non-contradiction rules out the ‘truth’ claims that ‘all paths lead to God’ and that ‘all religions are the same,’ simply because each religion offers conflicting, and exclusive truth-claims, as to what the path is. Even though pluralistic interpretations of religion…possess a strong intuitive appeal, nevertheless, they possess two deficiencies which, in the final analysis, render them unacceptable.

Let’s test the ‘truth-claim’ of ‘all paths lead to God,’ by comparing the truth claims of the other major religions to that of Christianity:

It would seem that the ‘all paths lead to God’ ‘truth-claim’ has failed the truth test miserably, as well as ‘all religions are relatively the same.’ At best, all religions are superficially the same, although, even that is a stretch, but they are absolutely fundamentally different.

Now some may say, “when you compare the Sermon on the Mount, and Buddha’s Dhammapada, Lao-tzu’s Tao-te-ching, Confucius’ Analects, the Bhagavad Gita, the Proverbs of Solomon, and the Dialogues of Plato, you will find that they are in real, profound, and strong agreement.” Well that may be the case, but this is not a comparison of religion, but of ethics. The essence of religion is not ethics considering that everyone has a code of ethics, but not everyone has a religion. Ethics may be a first step in religion, but it is certainly not the fundamental one.[2] Every religious worldview, or any worldview, for that matter, must be accessed on where they stand in relation to the big four questions—origins, purpose/meaning, morality, and ultimate destiny. In his book, “God is Not One,” Stephen Prothero concurs, “The Golden Rule can be found not only in the Christian Bible and the Jewish Talmud but also in Confucian and Hindu books. No religion, however, sees ethics alone as its reason for being…The world’s religious rivals do converge when it comes to ethics, but they diverge sharply on doctrine, ritual, mythology, experience, and law. These differences may not matter to mystics or philosophers of religion, but they matter to ordinary religious people.”[3]

Let’s continue on with the truth testing.

In the following analysis, Keith E. Johnson posits three (of the many) areas of contradiction within the major religions worldviews, which further refute the ‘all paths lead to God’ claim:

(1) The first area of contradiction regards the nature of the ultimate reality (such as God). One discovers there is a vast chasm between monotheistic religions (such as Judaism, Christianity and Islam), and pantheistic religions (such as Hinduism, Buddhism). Muslims claim that there is only one God, Allah, who created the universe from nothing. Some Hindus, on the other hand, believe not in a personal creator but in an impersonal absolute reality (Brahman) which permeates all things. Other Hindus believe that there are millions of deities (such as Brahma, Vishnu, Shiva, and Krishna) which are manifestations of Brahman.

(2) A second area of contradiction relates to the fate of individuals at death. According to Islam, each person will die once and then face judgment by Allah. Depending on Allah’s judgment, a person will spend eternity in heaven or hell. In contrast, many Hindus assert that people will live (and have already lived) many lives. Moreover, Hindus believe that the conditions of one’s past and future existence are determined by the cosmic laws of karma. Following death each of us is reincarnated into a different form (human, animal, etc.).

(3) Each religious tradition also identifies a universal problem that afflicts humanity. This brings us to a third area of disagreement. For example, Hindus claim that the universal problem facing humanity is samsara. Samsara is an endless cycle of birth, death and rebirth (reincarnation) in which every person is trapped. Only through knowledge of one’s relationship to Brahman and religious devotion can this cycle be broken and moksha (release) experienced. Christianity, on the other hand, maintains that the universal problem facing every person is separation from God. According to Christianity, each person has rebelled against God by violating his commands (what the Bible calls “sin”). Christianity insists that there is no human solution to this problem. Only through a relationship with Jesus Christ can this problem of separation from God be overcome. Christians believe that Jesus Christ paid an individual’s sin-penalty through his death on the cross in order to restore him or her into relationship with God.

These conflicting claims about the nature of the Ultimate, the fate of individuals at death, as well as the universal problem facing humanity are only a few of the conflicting assertions made by different religious traditions. These conflicts render implausible the assumption that all paths lead to the same destination.[4]

Finally, let’s take a close look at the popular illustration of “all religious paths lead to the same destination, that is, to the top of the mountain.” This illustration posits that from the bottom of the mountain, we can know where all the paths ultimately lead, but can we? If we analyze this illustration closely, we must first ask the question: from the bottom of the mountain, how would we know which paths led to the top and which were dead ends? From the base of the mountain looking up, we would not be able to know which paths would take us to the top. Only someone with a top down view would be able to know where each path would lead, in other words, someone who is above the mountain looking down. But who is the only one with this view? That’s right—it would have to be God. So when someone states that ‘all paths lead to the top of the mountain,’ or to the ultimate goal of God, who are they claiming to be? Well, God of course. Now that is quite a claim, one that only one person made and validated in the history of mankind, the God-man, Jesus Christ. That being the case, wouldn’t it make sense to first investigate the life, death and resurrection of the Man who not only claimed, but backed up those claims to the be One who has the view from above the mountain looking down?

J. Warner Wallace offers the following challenge to those who are still ‘asking, seeking and knocking’ in their journey of faith: 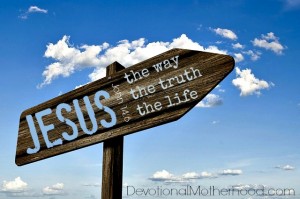 Given Jesus is a common feature of the major religions of the world, it might be important for us to learn more about the man whom everyone feels the need to describe. While the world’s religions account for Jesus tangentially, only one faith system is established on the authentic, attested eyewitness accounts of Jesus’ life, teaching and ministry. If one was inclined to begin a spiritual quest for truth, it would be wise to start with the faith system best describing the man all other faith systems find themselves compelled to explain. Christianity is founded on the reliable record of the man-God we know as Jesus and ought to be the first stop in any seeker’s journey of faith.[5]

1. Keith E. Johnson, Do All Paths Lead to the Same Destination?, 1997, http://www.leaderu.com/wri/articles/paths.html
2. Peter Kreeft, The Uniqueness of Christianity, http://www.peterkreeft.com/topics-more/christianity-uniqueness.htm
3. Prothero, Stephen, God Is Not One: The Eight Rival Religions That Run the World–and Why Their Differences Matter, 2010, p. 2, HarperCollins
4. Ibid, Keith E. Johnson, 1997
5. J. Warner Wallace, Who is Jesus, According to Other Religions, http://coldcasechristianity.com/2014/who-is-jesus-according-to-other-religions/

One God, Many Paths–Michael Ramsden
Are there many paths to God? Do all paths lead to God? Are all religions equally true? How does Christianity compare to and answer the truth claims of other religious worldviews.