A Closer Look at Islam-video format-by Alan Shlemon
Islam is gaining more attention every day, but popular understandings of Islam seem to be missing the true nature of Muslim beliefs and practices. As ambassadors for Christ, we’re called to learn the truth about Islam and engage with Muslims in a Christlike manner.

In the first of this two-part series, Alan Shlemon demystifies what Islam really teaches by pointing directly to its authoritative sources. He then examines how it stacks up to Christianity, providing a better understanding of Muslims and their faith.

In part two, Alan discusses how to have Gospel-centered interactions with your Muslim neighbors, employing a powerful tactic to help reach them in a way that builds common ground, respects their faith, and uses their own scriptures to point them to the truth.

Part 1:
•Our Commission as Ambassadors
•The Truth about Violent Jihad
•The Basic Doctrines of Islam
Part 2:
•Responding to Objections
•Engaging Your Muslim Neighbor

For more information and how to order click, here

“Always being prepared to make a defense to any Muslim who asks you…”-1 Pet. 3:15

Once a Muslim expressed to me his disbelief and even scorn at the idea of Christians wearing crosses: “How can Christians wear with pride the instrument of torture and humiliation? If your brother were killed in an electric chair, would you wear an electric chair around your neck?” I replied that it depends: “If my brother happened to be Jesus of Nazareth and his death in an electric chair brought about my salvation and was the means by which evil was defeated and creation renewed, then he would have transformed a symbol of shame and punishment into something glorious.”–Paul Copan, from his book, Is God a Moral Monster?-Making Sense of the Old Testament God, 2011, Baker Books, pg. 33

A Muslim friend, Abdul, once expressed his difficulties with God becoming a human and dying on the cross. “It’s such a humiliation!” he exclaimed. For the Muslim, God is so utterly transcendent and removed from us. Yet Philippians 2 marvelously displays the depths to which God is willing to go for our salvation: God the Son humbles (empties) himself, becoming a slave (doulos) who dies fully naked, for all to see–in great shame and humiliation (vv. 6-8). Jesus’s crucifixion is a picture of both humility and greatness. God’s humiliation turns out to be his own mark of distinction and moment of glory!–Paul Copan, Is God a Moral Monster?-Making Sense of the Old Testament God, 2011, Baker Books, pg. 32

Even if the present Qur’an were a perfect word-for-word copy of the original as given by Muhammad, it would not prove the original was inspired of God. All it would demonstrate is that today’s Qur’an is a carbon copy of whatever Muhammad said; it would say or prove nothing about the truth of what he said. The Muslim claim that they have the true religion, because they have the only perfectly copied Holy Book, is as logically fallacious as someone claiming it is better to have a perfect printing of a counterfeit thousand dollar bill than a slightly imperfect printing of a genuine one! The crucial question, which Muslim apologists beg by this argument, is whether the original is God’s Word, not whether they possess a perfect copy of it.-Norman Geisler & Abdul Saleeb, Answering Islam, 2002, Baker Books, pg. 199

So these forty Arabic words stand alone in the Qur’an. (referring to Sura 4:157) They stand alone without commentary in the hadith literature as well. They stand against not only the natural reading of the other Qur’anic texts but also against the entire weight of the historical record. Forty Arabic words written six hundred years after the events they describe, more than seven hundred fifty miles from Jerusalem. Forty Arabic words that are not clear, not perspicuous, and yet this is the entirety of the foundation upon which the Islamic faith bases its denial of the crucifixion, and hence, resurrection of Jesus Christ.–James R. White, What Every Christian Needs to Know About the Qur’an, Baker Publishing, 2013, pg. 142 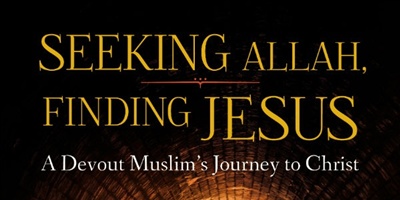 3 Ways to Show Christ’s Love to Your Muslim Neighbor–by Nabeel Qureshi
“I was raised in a devout Muslim home, confident of the truth I had been taught all my life about Allah and Qur’an. So how did I move from believing adamantly in Islam to telling others about Jesus? It started with a friendship during my college days when a Christian named David befriended me despite our differences. If you want to connect with your Muslim neighbors, classmates or coworkers, here are three suggestions from someone who’s been on the receiving end of a life-changing friendship…” For complete article, here  For purchasing the book, “Seeking Allah, Finding Jesus”, by Nabeel Qureshi, here

Many Christians make mistakes when trying to witness to Muslims. One reason is that Islam is not only a religion but it is also a culture and a way of life. In this article, three common mistakes are highlighted and addressed. For the complete article, here.

Resource books–reaching Muslims with the Gospel:
Any 3-Anyone, Anywhere, Anytime–Lead Muslims to Christ Now!–by Mike Shipman
The Crescent Through the Eyes of the Cross-Insights from an Arab Christian–by Dr. Nabeel T. Jabbour
Grand Central Question–Answering the Critical Concerns of the Major Worldviews–by Abdu H. Murray
What Every Christian Needs to Know about the Qur’an–by James R. White
The Messenger, The Message, The Community-by Roland Muller

How to start a conversation with a Muslim friend-Alan Shlemon-str.org

Q&A: What If They Don’t Believe the Bible?–Nabeel Qureshi

Jesus Christ Revealing Himself to Muslims
Here the account of how these Muslims met Jesus Christ. The stories of Fariborz, Hanene, Hanife, Hassan, Hormoz and Kadia. A Muslim Journey to Hope presents the stories of people who have had a life-changing experience. Each story is true, and each story is different. Yet they are as different as the lives of each person: Women and men. Young and old. Rich and poor. From many countries in the world. Each story tells how each of these people has found hope in Jesus Christ–“…the Way, the Truth and the Life.” (John 14:6)

During Hajj A Muslim Man Became a Christian–“Dreams and Visions–Is Jesus Awakening the Muslim World?”–get the book here