Has anyone ever challenged you with the question, “can God make a rock to heavy for him to lift?”, and before you can answer, they say, “see, God isn’t all-powerful/omnipotent as you, as a Christian, contend.” A number of refutations have been posited in dealing with this question, several of which are given in the videos below, which will help to equip the Christian case-maker in addressing this challenge.

Along with the refutations found in the videos, I would like to highlight the refutation of C. S. Lewis, which can be found in his book, The Problem of Pain. In the second chapter of the book, Divine Omnipotence, Lewis defines omnipotence, and helps the reader to understand how omnipotence is applied to ‘all agents,’ including God. Following in the thought and understanding of Thomas Aquinas, “Nothing which implies contradiction falls under the omnipotence of God,” [1] Lewis explains how possible and impossible, as well as self-contradiction, are to be understood when addressing this challenge:

Omnipotence means ‘power to do all, or everything’. And we are told in Scripture that ‘with God all things are possible’. It is common enough, in argument with an unbeliever, to be told that God, if He existed and were good, would do this or that; and then, if we point out that the proposed action is impossible, to be met with the retort ‘But I thought God was supposed to be able to do anything’. This raises the whole question of impossibility…I know very well that if it is self-contradictory it is absolutely impossible. The absolutely impossible may also be called the intrinsically impossible because it carries its impossibility within itself, instead of borrowing it from other impossibilities which in their turn depend upon others. It has no unless clause attached to it. It is impossible under all conditions and in all worlds and for all agents. ‘All agents’ here includes God Himself. His Omnipotence means power to do all that is intrinsically possible, not to do the intrinsically impossible. You may attribute miracles to Him, but not nonsense. This is no limit to His power. If you choose to say ‘God can give a creature free will and at the same time withhold free will from it’, you have not succeeded in saying anything about God: meaningless combinations of words do not suddenly acquire meaning simply because we prefix to them the two other words ‘God can’. It remains true that all things are possible with God: the intrinsic impossibilities are not things but nonentities. It is no more possible for God than for the weakest of His creatures to carry out both of two mutually exclusive alternatives; not because His power meets an obstacle, but because nonsense remains nonsense even when we talk it about God. It should, however, be remembered that human reasoners often make mistakes, either by arguing from false data or by inadvertence in the argument itself. We may thus come to think things possible which are really impossible, and vice versa. We ought, therefore, to use great caution in defining those intrinsic impossibilities which even Omnipotence cannot perform. [2] 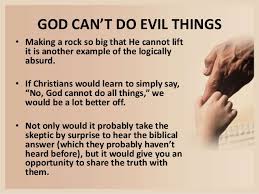 I will conclude with another insightful statement on the topic, by dear C. S. Lewis:

“Can a mortal ask questions which God finds unanswerable? Quite easily, I should think. All nonsense questions are unanswerable. How many hours are in a mile? Is yellow square or round? Probably half the questions we ask – half our great theological and metaphysical problems – are like that.” [3]

Can God Make a Rock so Big He Can’t Lift It?-Sean McDowell

Can God Make a Stone So Heavy He Can’t Lift It?-William Lane Craig