(This is an article from the July-August 2013 issue: A Historic Wind is Blowing Through the House of Islam) 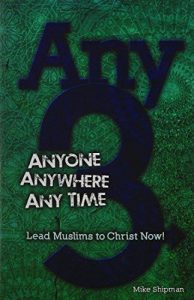 Any-3 is a five-step process which starts with getting acquainted and leads to discovering whether the Holy Spirit is at work in that person’s life to convict them of sin and prepare them for salvation.

Mike Shipman and his team experienced years of fruitless ministry in a “resistant” Muslim field. In desperation they decided to simply present the Gospel to everyone as a way to discover who the Spirit was already drawing to follow Jesus. Those who were responsive would then receive discipleship toward faith in Jesus.

“The First and Last Sacrifice Story” is the simple gospel presentation they developed.

To their amazement, Mike’s team found that the Holy Spirit has prepared some Muslims to accept Christ within minutes or hours of hearing the gospel, even without an investment of months or years to build relationships.

They suddenly found the people among whom they were working to be highly receptive. And from this experience they identified various false perceptions which had been crippling their ministry, which they dubbed Be-e Stings.

Seven years after their first new believer, Shipman and his team report the following fruit:

More than 5,000 Muslims … have professed faith in Jesus Christ through Any-3 style evangelism. … Of the more than 450 groups that have formed among our people group, one-third of them are fourth generation and beyond. …

We are doing today what very few people dreamed possible among Muslims—sharing the gospel and often hearing them say, “Thank you.”

Simple: A person can learn Any-3 in an hour, practice it with a friend that afternoon, and have fruitful interaction with Muslims that evening!
Natural: “It feels spontaneous and free, helping Christians live an evangelizing lifestyle.” Yet Any-3 provides a simple and natural path for moving from casual conversation to a gospel presentation and inviting a positive response.
Adaptable: “Because its principles derive from the evangelism pattern modeled by Jesus in John 4, Any-3 can be adapted to virtually any culture or worldview.”
God is using Any-3 to awaken and empower His people to eagerly share the gospel once again. Those who do are experiencing for themselves the gospel’s power and joy.

Five-Step Process
As he walked through a secluded area of a conservative Muslim suburb, Derek prayed for the Lord to connect him with someone with whom he could share the gospel.

Hasan was sitting at a small food stall drinking juice as Derek passed by. Hasan was waiting for his wife, who was in a salon. Seeing Hasan, Derek purchased a drink as well, and sat down near him.

The two began making small talk as they passed the time. Quite naturally Derek asked Hasan about his religion. The conversation maintained a relaxed tone, but Derek knew where he wanted it to go. With a few casual questions, Derek suggested that mankind shared a common sin problem. Hasan agreed, “Yes, we’re all sinners.”

Derek asked Hasan what he was doing to get his sins forgiven. Hasan mentioned three of the five activities his religion requires to please God. Then Hasan admitted, “My sins aren’t forgiven yet. I don’t know when they’ll be forgiven. On the judgment day, I can only hope my sins will be forgiven.” Derek was expecting this answer, knowing that Muslims rarely have any assurance of their own salvation.

Derek then politely, yet confidently, told Hasan that he knew his own sins were forgiven. He then explained how he knew, by telling Hasan a story identifying Christ as God’s sacrificial Lamb, who died for our sins and was raised from the dead. Derek concluded by telling Hasan that anyone who surrenders himself to Jesus, with repentance of sin and belief in the gospel, will have his sins forgiven.

Hasan responded by agreeing. It made sense to him that his good works could never cancel out all of his sins, but that God had made a way for forgiveness through Jesus. When Derek asked Hasan if he believed the gospel, Hasan replied with words of sincere conviction and openness. He was convinced that what Derek had shared was true, even though this was the first time he had heard the good news about Jesus’ sacrifice for him.

Derek then quoted Romans 10:9, explaining the need for repentance and surrender to Jesus Christ as Lord. That night, Hasan believed that God was calling him to salvation, and prayed to surrender himself to Jesus. And Derek’s evangelist zeal was renewed. (end of excerpts from the article)

For the complete article, here