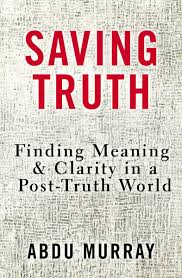 A little over two-thousand years ago, Pontius Pilate, the governor of Judaea, asked Jesus, “what is truth?” Sadly, the truth was standing right in front of him, but Pilate did not wait for the answer. Today, many are struggling with the confusion of the post-truth ideology that has engulfed the societies of the West, and they too are asking the question, “what is truth?”

In his new book, Saving Truth-Finding Meaning & Clarity in a Post-Truth World, author and speaker Abdu Murray will most certainly help to answer this question and bring clarity to his readers as he explains just how this ‘post-truth’ era came about and how it has brought us into a Culture of Confusion which is detached from reality and awash in feelings, preferences and relativism.

Murray sets the stage at the beginning of his book:

“Culturally speaking, in the past decade we have found ourselves adrift in a river with no bearings in sight. The cultural river we find ourselves in isn’t narrow. We can barely see the land’s outline. In fact, we departed from it so long ago that we’ve forgotten what solid earth feels like and have begun to question whether the land itself is anchored or afloat. As if to put an exclamation mark on this situation, the Oxford Dictionaries selected “post-truth” as 2016’s Word of the Year. The Oxford Dictionaries annually select a word that captures the culture’s current mood and preoccupations. And post-truth does exactly that. According to Oxford Dictionaries, post-truth means “relating to or denoting circumstances in which objective facts are less influential in shaping public opinion than appeals to emotion and personal belief.” Although the word dates back to at least 1992, the usage of post-truth ballooned in 2016 by 2,000 percent.”

Post-truth has now blossomed into a Culture of Confusion. Confusion is embraced as a virtue and clarity shunned as a sin. The answers to life’s questions no longer need to correspond to reality. They need only cater to our desires.”

Later, in his chapter, Confusion and the Church: Seductions of a Post-Truth Mindset, Murray offers the following insight on how the post-truth ideology has affected the Church of the West:

Seduction in a Two-Part Harmony: The church has succumbed to post-truth’s soft expression in two seemingly contrary ways. On one hand, Christians have compromised the clarity of Scripture for the sake of acceptance and to avoid conflict. On the other hand, Christians have indulged the cultural practice of vilifying those with whom they disagree. These two seductions seem contradictory, but when they work together, they harmonize in a grisly dirge…

So why do so many people, including Christians, misapply Jesus’ statements as a blanket prohibition against all judgment? There are as many reasons as there are people who do so. One common reason is that Christians want to appear tolerant and likable, especially in a time when tolerance, though woefully misdefined–is a chief virtue. Put plainly, many Christians have bought into what Kinnaman and Lyons call “the new moral code” that people should not criticize someone else’s life choices. Can we see the seduction playing out right before our eyes? The post-truth Culture of Confusion elevates preferences and feeling over facts and truth… Dallas Willard’s apt assessment of the spiritual landscape, in which “most of what Americans do in their religion now is done at the behest of feelings… The quest for pleasure takes over the house of God.” Willard’s indictment is true for some of us all of the time. And it is true for all of us at least some of the time.

The second seduction–that of using the truths of Scripture to bludgeon outsiders–brings a pendular swing of over-correcting our desire to be liked. Too often, Christians conveniently forget the fact that like everyone else, they need a Savior. When Christians forget that, they create an “us versus them” paradigm, leading to Christians hungrily gobbling up and passing along iffy articles about how awful “they” are without a moment’s pause. Worse yet, Christians may make churches so unwelcoming that they repel the very people who could benefit from what Jesus has to offer. Truth is once again sacrificed, but this time at the altar of a self-righteous higher agenda to stand up to “them.” Fair or not, people judge the credibility of a message by the integrity of the messenger. If the gospel message of compassion, forgiveness, and reconciliation is proclaimed by those who seem to have none of those qualities, it’s hard to see how the broader culture’s response can be anything but concomitant dismay and anger.

At the end of his last chapter, The Son through Fog: Clarity’s Hope, Abdu presents the answer to the question, “What is truth?”

Jesus is the river and the land, the fount of living water and the rock of our salvation. He secures humanity’s freedom to be what we were intended to be: sacred beings in relationship with the divine. When we realize that, confusion dissipates like a fog and clarity remains. What is truth? we may ask in a world that elevates personal preference over truth. The answer is Jesus–the truth who is personal. He is the Saving Truth.

More books from Abdu Murray:
Grand Central Question: Answering the Critical Concerns of the Major Worldviews
Apocalypse Later: Why the Gospel of Peace Must Trump the Politics of Prophecy in the Middle East