Is the Father of Jesus the God of Muhammad? A careful analysis

I recently attended the Evangelical Theological Society conference held in San Antonio, Texas (2016). The theme of the conference was, The Trinity. As I work in the evangelistic area of ministry to Muslims, I focused my time on the conference sessions that were devoted to on Christian-Muslim dialogue and theology. One of the sessions was entitled, Do Christians and Muslims Worship the Same God? As many of you know, this has become a hot button topic since the dispute at Wheaton College involving Professor Larycia Hawkins, in the latter part of 2015. (For more on this topic, article here.)

Dr. Imad Shehadeh, in his paper, Allah and the Trinity[1], offers the following insight and perspective on the question, ‘do Christians and Muslims worship the same God’:

(We begin in the paper with a quote from Duane Litfin): “The question of whether Muslims and Christians worship the same God “is not only unhelpful but perhaps worse than unhelpful. The question appears incapable of generating a satisfactory answer, and when well-intentioned people try to answer it anyway, as they often do, the typical result is turmoil and confusion. How could it be otherwise? Any question that can only be answered with a ‘Maybe, maybe not…is doomed from the outset… How much ‘sameness’ is required to answer yes? How much difference to answer no?”[2]

The solution to this stalemate is that the question that should be asked is not about sameness, but about difference. What is the belief that Christianity has that Islam does not adhere to? From this difference stems all other differences.

“Understanding what Islam and Christianity do and do not hold in common is an important task these days, but asking whether Muslims and Christians worship the same God will not get us there. If our goal is to compare these two religions we need to shift our focus to a much more illuminating question: How do Christianity and Islam differ?”

There is an unavoidable difference in the conception of God as spoken of by Christianity and Islam. This difference is in one word: the gospel. Both have common beliefs, but Christianity goes much further than Islam does, holding to core beliefs about God not found in Islam and even strongly rejected by it.[3]

In his book, Is the Father of Jesus the God of Muhammad?, Dr. Timothy George addresses the question, ‘do Christians and Muslims worship the same God.’ He states:

Is the Father of Jesus the God of Muhammad? The answer to this question is surely both yes and no. Yes, in the sense that the Father of Jesus is the only God there is. He is the sovereign Creator and Judge of Muhammad, Confucius, Buddha—indeed, of every person who has ever lived, except Jesus, the one through whom God made the world and will one day judge it (Acts 17:31; Col. 1:16). The Father of Jesus is the one before whom all shall one day bow the head and bend the knee. (Phil. 2:5-11). It is also true that Christians and Muslims can together affirm many important truths about this great God—his oneness, eternity, power, majesty. As the Quran puts it, God is “the Living, the Everlasting, the All-High, the All-Glorious” (2:256) 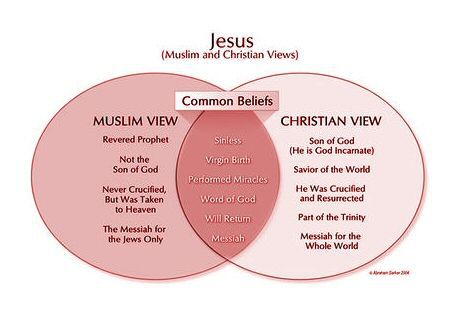 But the answer to the question “Is the Father of Jesus the God of Muhammad?” is also no, for Muslim theology rejects the fatherhood of God, the deity of Jesus Christ, and the personhood of the Holy Spirit—each of which is an essential component of the Christian understanding of God. No devout Muslim can call the God of Muhammad “father,” for this, in Islamic thought, would compromise divine transcendence. But no faithful Christian refuse to confess with joy and confidence, “I believe in God the Father, Almighty!” Apart from the revelation of the Trinity and the Incarnation, it is possible to know that God is, but not who God is.[4]

In the post-Christian area, Muhammad gave fresh impetus to the lost abstract monotheism of the non-Hebrew world. To be sure, his emphasis that there is no God but Allah leans heavily on the Mosaic revelation. But an obscure doctrine of revelation crowds out the living monotheism of the Old Testament and allows Muhammad to emerge as Allah’s prophet; moreover it clouds the dynamic monotheism of the New Testament by displacing the revelation of the supremacy and deity of Jesus Christ.”[5]

In his paper, Allah and the Trinity, Dr. Imad Shehadeh explains how Islam’s changing of concepts, predicates and attributes pertaining to the God of both the Old and New Testament, results in the “speaking of a different subject all together.

Both Christianity and Islam believe in the existence and oneness of God, but this belief is so fundamental and rudimentary that even the fallen angels believe the same. The Bible challenges the person that has this faith saying, “You believe that God is one. You do well; the demons also believe, and shudder” (James 2:19).

Islam later presented a different concept of the same word “Allah” used beforehand by Jews and Christians. The result was that there ends up being a similar subject with different predicates, or attributes. This different concept made it impossible for Islam to move in the same direction that Christianity was moving on, with its foundation in the Old Testament of the Bible, and continuing into the New Testament.

From the beginning, the Old Testament laid the foundation for a unique concept of the unity of God that required explanation. This explanation came later in the New Testament. The New Testament declared a complete and unique concept of the unity of God, which is Relational Oneness. The Quran and Hadith declare a completely different concept, and it is Absolute Oneness. As Mombasa put it over a century ago, “the adoption of the faith of Islam by the pagan people is in no sense whatever a stepping-stone towards, or a preparation for, Christianity, but exactly the reverse.”

The concept of God in his predicates or attributes in Islam become so different that they redefine the subject! This then reintroduces the starting point in Islam and Christianity as having different subjects all together. It is then easy to conclude that Islam seems to start with the same subject, but it later demonstrates that it is actually speaking of a different subject altogether! As Carl Henry asserted, “The importance of the discussion of divine attributes is apparent from the fact that one often alters a subject by applying different predicates to it.”[6]

John Paul ll offers the following commentary in regards to the distance between Islam and Christianity, both theological and anthropological:

“Whoever knows the Old and New Testaments, and then reads the Qur’an, clearly sees the process by which it completely reduces Divine Revelation. It is impossible not to note the movement away from what God said about Himself. First in the Old Testament through the prophets, and then finally in the New Testament through His Son. In Islam all the richness of God’s self-revelation, which constitutes the heritage of the Old and New Testaments, has definitely been set aside.

Some of the most beautiful names in the human language are given to the God of the Quran, but He is ultimately a God outside of the world, a God who is only Majesty, never Emmanuel, God-with-us. Islam is not a religion of redemption. There is no room for the Cross and the Resurrection. Jesus is mentioned, but only as a prophet who prepares for the last prophet, Muhammad. There is also mention of Mary, His Virgin Mother, but the tragedy of redemption is completely absent. For this reason not only the theology but also the anthropology of Islam is very distant from Christianity.”[4]

Abdu Murray, a former Shia Muslim who converted to Christianity, offers the following perspective in regards to his experience on ‘both sides of the same God fence,’ so to speak. He said:

When I became a Christian, I didn’t suddenly say, “I believe in God now,” like I was an atheist before or something. That’s not how I thought of it. I just thought to myself, “Oh I believe in God correctly now, or I believe the true things about God.” Because there are differences. The fundamental difference is God’s oneness. Now, Muslims and Christians agree on something, there is one God. Christians call him Yahweh and Muslims call him Allah, but there is only one. But Muslims say that God is one in his nature and one in his person, he’s an undifferentiated absolute, what is called a monad concept of God. Whereas Christians are Trinitarians, we believe that God is one in his nature and three in his personhoods. Now that’s significant because you can’t have a completely great self-sufficient being without a Trinitarian being. Also, the Trinity makes sense of the Incarnation, it also makes sense of the atonement, because the Son is paying something to the Father and they have to be distinct in some sense, there has to be a real actual transaction…God in Islam is not Trinitarian, in fact that is considered blasphemy in Islam…Prominent Muslim and Islamic scholar, Al-Faruqi has stated, “This is the deepest difference between Islam and Christianity, the knowability of God.” [In Islam] He’s not a person to be known, he is a will to be followed.”[8]

At first blush, it may seem that Abdu’s testimony supports the, ‘Christians and Muslims worship the same God, but the Muslims simply worship him imperfectly and/or incorrectly.’ But when taking his testimony in the context as to who Christians and Muslims identify and believe Yahweh and Allah to be, it becomes clear that they do not worship the same God. As is stated above, simply believing in the oneness of a creator God is not the same as believing in a Creator God who is personal, Triune and has acted and entered into His creation to bring salvation to each human being who chooses to receive His marvelous gift. Again, referring to Dr. Imad Shehadeh analysis above, “The concept of God in his predicates or attributes in Islam become so different that they redefine the subject! This then reintroduces the starting point in Islam and Christianity as having different subjects all together. It is then easy to conclude that Islam seems to start with the same subject, but it later demonstrates that it is actually speaking of a different subject all together!”

Scottish Anglican scholar Stephen Neill, states what I consider the core issue posed by the question, ‘Do Christians and Muslims worship the same God?’:

“Christians and Muslims alike passionately proclaim belief in one God. But everything depends on the meaning we put into the word “God.”

Do Christians and Muslims Worship the Same God?-William Lane Craig-reasonablefaith.org

Is the Father of Jesus the God of Muhammad?-Timothy George

For further study on the topic: