Relativism and the redefining of tolerance

A little over 2000 years ago a Roman procurator asked the question, “WHAT IS TRUTH?” [1] Today this question is rarely, if ever asked, with the exception of a witness in a trial—“Do you solemnly (swear/affirm) that you will tell the truth, the whole truth, and nothing but the truth, (so help you God/under pains and penalties of perjury)?”

To speak of truth, or to inject a truth claim into a conversation today, is tantamount to heresy, and is usually met with a ferocious attack by relativist proponents. Philosopher Peter Kreeft observes that of all the symptoms of decay in our culture, relativism is the most disastrous. It is, in the words of Michael Novak, “an invisible gas, odorless and deadly, that is polluting every free society on earth.” C. S. Lewis called it “the disease that will certainly end our species (and… damn our souls) if it is not crushed.” And as William Gairdner notes, “Ironically, relativism has become our only absolute.”[2]

But what is relativism? Here are two definitions:

Relativism is the belief that there’s no absolute truth, only the truths that a particular individual or culture happen to believe. If you believe in relativism, then you think different people can have different views about what’s moral and immoral.

Relativism may be a philosophical position, but is it a tenable one? Can all points of view be equally valid as the relativist worldview claims? If so, does this mean that Mother Teresa’s point of view and that of Hitlers,’ are equally valid? Or that of Pol Pot and John Paul ll? It doesn’t take many examples to realize that the relativist worldview is bankrupt of logical consistency, empirical adequacy, and experiential relevance. Contrary beliefs can exist, contrary truths cannot.

The problem with relativism is that it is self-refuting, and as such, cannot be lived. Ask anyone who espouses relativism if it is true that all things are relative? If they say yes, then simply ask the question, “Well, is the statement you just made relative? If it is, and it has to be under your definition of relativism, then it is simply your opinion, and why should I value your opinion over mine or anyone else’s for that matter.” So if relativism is untenable, then objective truth must be the ethical and moral bedrock on which the universe was created, regardless of whether a person chooses to believe it or not.

In his book, The Turn of the Tide, Prof Keith Ward offers the following observation: 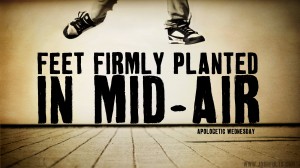 It is a central heresy of our culture to say that all truth is relative; that one thing may be true for me and quite another may be true for you. This absurdity destroys the very notion of truth…. and is the result of muddled thinking. No one can seriously believe that a belief which contradicts his or her own is just as true. The expression ‘It is true for me’ is self-confuting. Either a thing is true or it is not… Can we imagine saying, ‘Well the earth is round to me; but it may be flat to you’? The earth is either round or flat; it cannot be both; and what you or I think about it is irrelevant. You may claim that religion and ethics is not a matter of truth at all. Very well, do not use the word ‘true’; but if you use it, do not render it unintelligible by adding that empty phrase, ‘for me.”[4]

Alan Bloom explains how relativism has become one of the crowning virtues of our age:

“Relativism is necessary to openness; and this is the virtue, the only virtue, which all primary education for more than fifty years has dedicated itself to inculcating. Openness–and the relativism that makes it the only plausible stance in the face of various claims to truth . . .–is the great insight of our times.”[5]

However, this “great insight” is having a devastating effect on today’s Western culture/society as it is permeating the very fabric of society and influencing how people think and consequently act. Calling the conflict between relativism and objectivism “the central cultural opposition of our time,” author and philosopher, Richard J. Bernstein reports that the result of this conflict is that, “There is an uneasiness that has spread throughout intellectual and cultural life. It affects almost every discipline and every aspect of culture” (see footnote below)

William Lane Craig gives the somber warning as to where relativism, when applied to religious dialogue, leads:

Relativism and tolerance, as it has been redefined, are the two crowning virtues of Western culture today. But how has this redefining process been accomplished? 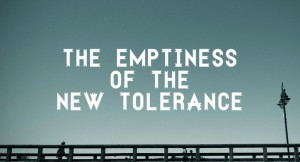 In his milestone book, The Intolerance of Tolerance, D. A. Carson states, “The political left controls culture (the media, entertainment, education, and politics). The new tolerance is a cultural force, not an intellectual force.”[7]

The old view of tolerance assumed that:

(1) there is objective truth that can be known;
(2) various people, groups and perspectives each think they know what that objective truth is and
(3) as people/groups disagree, dialogue and debate their conflicting views of the truth, everyone involved will have an opportunity to learn, grow, change and possibly arrive together at the truth.

The new view of tolerance assumes that:

(1) there is no objective truth that can be known;
(2) various people, groups and perspectives do not have the truth but only what they believe to be the truth and
(3) various people, groups and perspectives should not argue and debate their disagreements because there is no truth to be discovered, and to assume otherwise only leads to needless conflicts and prejudices….the new tolerance…denies moral absolutes while holding to the moral absolute that there is no moral absolute. I know that’s confusing. It’s like saying, “There is no such thing as absolute truth”—to which the question should be asked, “So does that mean you’re lying when you want us to believe your absolute statement that truth does not exist?” You cannot say absolutely that there are no absolutes. I hope you see that the statement itself saws off the very limb it’s sitting on.[8]

Other articles re relativism/redefining of tolerance:

Notes:
[1] Bible, John 18:38
[2] William Gairdner, The Book of Absolutes, MQUP, 2008
[3] Paul Copan, True for You, But Not for Me, Minneapolis: Bethany House, 1998
[4] Keith Ward, The Turn of the Tide, p 144 (BBC)
[5] Alan Bloom, The Closing of the American Mind, New York: Simon & Schuster, 1987, p. 26. Calling the conflict between relativism and objectivism “the central cultural opposition of our time,” Bernstein reports that as a result of this conflict “There is an uneasiness that has spread throughout intellectual and cultural life. It affects almost every discipline and every aspect of culture” (Richard J. Bernstein, Beyond Objectivism and Relativism, Oxford: Basil Blackwell, 1983, pp. 7, 1.
[6] William Lane Craig, Politically Incorrect Salvation, article can be found, here
[7] D. A. Carson, The Intolerance of Tolerance, Wm. B. Eerdmans Publishing Co., 2012, p. 104
[8] Mark Driscoll, Why the ‘New’ Tolerance is Actually Intolerant, (see link above for the complete article)