“Before I can make the case for Christianity, I have to make the case for making the case,” so states J. Warner Wallace in the preface of his new book, Forensic Faith-A Homicide Detective Makes the Case for a More Reasonable, Evidential Christian Faith. And he most certainly succeeds in making the case for making the case. (Wallace defines forensic faith as: Believing in something because of the evidence.) I recently purchased not only the book, but the Forensic Faith Curriculum Kit which includes the book, Forensic Faith, a participants guide, and an 8-episode DVD by J. Warner Wallace, with each episode leading the reader/class participant through an amazing apologetics journey, one that will result (if used and embraced) in a newly empowered Christian case-maker. This study is user friendly and can be used in small or large groups, youth Sunday classes, etc. I highly (and that is understating my exuberance) recommend the Forensic Faith Curriculum Kit to youth pastors, parents and individual Christians who have a desire to take their faith and case-making to the next level. Wallace has put together a tremendous tool, one that will help to stem and reverse the tide of the dwindling number of youth in their church if only it is used and applied. In the book, Wallace states the vital and urgent need for apologetic training if we are to keep our youth and transform them into Christian case-makers who are “always ready to give a defense to anyone who asks them for the reason of the hope that is in them…” (1 Peter 3:15):

When Christians see a crisis, we typically respond passionately. We readily rescue those devastated by natural disasters, feed the hungry, and do our best to meet the needs of the impoverished. We have a history of doing whatever it takes to respond to the real human challenges. Well, there’s another real challenge on the horizon. Christians (especially young Christians) are leaving the church in record numbers. Surveys and polls have been exposing this disturbing trend for many years now:

Most teenagers are incredibly inarticulate about their religious beliefs and practices. They typically cannot defend what they believe.
Young, uniformed believers also reject important Christian claims. Sixty-three percent of teenage Christians don’t believe Jesus is the Son of God; 51 percent don’t believe Jesus rose from the dead; 68 percent don’t believe the Holy Spirit is a real Being.
Between 60 percent and 80 percent of people aged 15-30 will leave the church for at least a season, ad most will never return. Only 33 percent of young, churched Christians said that church will play a part in their lives when they leave home.
When surveyed, the largest segment of young, ex-Christian respondents said they left Christianity because they had intellectual doubt, skepticism, and unanswered questions.

J. Warner Wallace is one of the most engaging writers I’ve ever read: to read him is like hearing him argue a public case. It is tragic that we have such strong evidence supporting Christian faith and yet many church-attending Christians never learn to articulate such evidence for people who–like me in my atheist days–desperately needed to hear it. More tragic still are young minds swayed by the mere assertions of Christianity’s often grossly misinformed, uncritical yet self-assured critics. Wallace’s case for making a case offers a desperately needed correction to a church culture too negligent about articulating truth.

I believe that the following challenge from Wallace is one that we as the Church need to meet head on by embracing a forensic, evidential faith that will strengthen us as believers, will energize and help keep our youth, empower us to “give a reason for the hope that is in us,” and thereby be effective case-makers when presenting the Christian worldview, and as such, make the impact that Christ intended us to make by being the “salt & light” of the world:

Shouldn’t we, as Christians, be the one group who knows why our beliefs are true and is most willing to defend what we believe? Why, then, are we often uninterested in the evidence? Why do 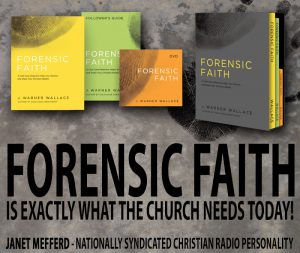 we sound like every other religious group when asked to give a reason for our beliefs? It’s time for the distinctly evidential nature of Christianity to result in a distinctly intelligent, reasonable, and evidential family of believers. This Christian difference ought to form our Christian duty. We are called to embrace a forensic faith and to love God with our minds. Police officers are called to serve and to protect. You don’t enter this profession unless this mission is part of your DNA. Officers understand their sworn duty, train rigorously in preparation for their mission, and lean how to investigate and discern the truth so they can ultimately communicate this truth to a jury. Every day is a call to action.
As a church, we can learn something from this resolute approach to mission. As Christians, we have a similar duty. The apostle Peter said we are called to serve one another with “sympathy, brotherly love, a tender heart, and a humble mind” (1 Peter 3:8 ESV) and called to protect the truth by “being prepared to make a defense to anyone who asks you for a reason of the hope that is in you” (verse 16 ESV). Christians are called to serve and protect. If we want to fulfill this duty, we’ll need to train rigorously so we can investigate and communicate the truth. I hope Forensic Faith is your call to action. It’s time to change course. It’s time to raise the bar. It’s time to get serious. It’s time to embrace our distinct duty as Christians.

In the Forward to Forensic Faith, John Stonestreet offers the following challenge to the Church in realigning their position as to the role that apologetics must play if we as Christians are to present a reasonable, rational and robust case when presenting the Christian worldview:

To loosely paraphrase the late Mark Twain, “The news of the demise of apologetics has been greatly exaggerated.” For decades now, skeptics who prematurely proclaim their beliefs as “settled science” have been assisted by Christians who prematurely proclaim apologetics–the practice of presenting arguments for the Christian worldview and against non-Christian worldviews–no longer helpful, if it ever was in the first place. They couldn’t be more wrong. It certainly sounds spiritual to say things like, “Arguments never saved anyone,” or, “No one is ever argued into the kingdom.” Such cliches are, however, silly straw men. I don’t know a single apologist who things of their arguments as salvific. Perhaps there are one or two who do, but I’ve never met them. More importantly, however, such statements display a misunderstanding of who we are as people. Certainly, faith involves more than our brains, but it does not involve less.–John Stonestreet, president of the Colson Center for Christian Worldview.

Other articles regarding the importance of developing a forensic, evidential faith:

(Forensic Faith is the third book of a trilogy-for the first book, Cold-case Christianity, and second book, God’s Crime Scene: A Cold-Case Detective Examines the Evidence for a Divinely Created Universe, click on the titles to be directed to Amazon.com. I highly recommend J. Warner Wallace’s site-coldcasechristianity.com–it is a valuable resource for every Christian case-maker.)

What is a forensic faith?-J. Warner Wallace

The Importance of Developing a Forensic Faith-J. Warner Wallace