by Lane
A Wind in the House of Islam, David Garrison, evangelism, evangelism to Muslims, Islam, Muslims
0 Comment 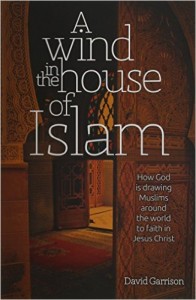 In the introduction of his milestone book/study, David Garrison reveals a movement of God’s Spirit within the House of Islam, a movement of a magnitude that has not been seen over the last 1400 years.

“A wind is blowing through the House of Islam. The House of Islam, Dar al-Islam in Arabic, is the name Muslims give to an invisible religious empire that stretches from West Africa to the Indonesian archipelago, encompassing 49 nations and 1.6 billion Muslims. Dwarfing the size of any previous earthly kingdom, Islam directs the spiritual affairs of nearly a quarter of the world’s population. But something is happening today that is challenging the hold that Islam exercises over its adherents. Muslim movements to Jesus Christ are taking place in numbers we’ve never before seen.”

What does this mean to us as Christians who have been called to be ambassador’s for Christ? Those who Christ commissioned  before His ascension and gave the promise of empowerment that we would “receive power when the Holy Spirit has come upon you, and you will be my witnesses in Jerusalem and in all Judea and Samaria, and to the end of the earth.” (Acts 1:8 ESV) When one considers the language/ethnic groups in which Jesus’ disciples spoke after they were endowed from the “power from on high,” Jesus’ commission is clear-we are to be ambassador’s of the Gospel to ALL people everywhere. “And they were amazed and astonished, saying, “Are not all these who are speaking Galileans? And how is it that we hear, each of us in his own native language? Parthians and Medes and Elamites and residents of Mesopotamia, Judea and Cappadocia, Pontus and Asia, Phrygia and Pamphylia, Egypt and the parts of Libya belonging to Cyrene, and visitors from Rome, both Jews and proselytes, Cretans and Arabians—we hear them telling in our own tongues the mighty works of God.” (Acts 2:7-11 ESV)

At the end of his book, David Garrison puts forth the following challenge and methodology for effective Muslim outreach:

“In the course of this book we have learned a lot about Muslims and about how God is at work in the House of Islam. This has been an insightful journey, but if we finish this journey with nothing more than education and observations, we have fallen short of the discipleship implications of this information. Christ’s invitation, indeed Christ’s mandate, is for us to be a part of his great work. Christ calls us to raise our spiritual sails and ride the wind of his Spirit that is blowing throughout the world.

How do we do this? Here are five practical steps we can take right now that will align us with God’s redemptive activity among Muslims.

2) Support outreach and ministries to Muslims-You’ve seen the importance of missionary and local Christian witness, Bible translation efforts, gospel videos, satellite television, radio broadcasts, compassion ministries, religious freedom advocacy, ministry to refugees, and other efforts. These ministries are costly. Muslims will not and should not be expected to pay for their own evangelization. That job is up to Christians, Christians from both a Muslim background and from a Christian background. God has placed more wealth into the hands of Christians today then at any time in history.

3) Go to Muslims-Movements to Christ do not take place spontaneously. They occur when someone sacrificially responds to God’s call and brings to them the good news…The Bible makes it clear, “How, then, can they call on the one they have not believed in? And how can they believe in the one of whom they have not heard? And how can they hear without someone preaching to them? And how can they preach unless thy are sent? As it is written, ‘How beautiful are the fee to those who bring good news!'” (Rom. 10:14-15)

4) Minister to Muslims in your own community-A rich definition of ministry has grown out of the many Muslim movements to Christ around the world; Christians participating in these movements define ministry as “answering the prayers of lost people.” this concept of ministry requires us to get to know Muslims, to listen to them, to become their friends.

5) Share the Gospel with Muslims-Prayer and ministry are the perfect preludes to gospel witness. When you’ve spent time praying for someone and then demonstrated Christ’s love to them through ministry, it is natural to “give the reason for the hope that you have.” “But” as the Apostle Peter continues, we must always “do this with gentleness and respect.” (1 Peter 3:15)
(end of excerpts from “A Wind in the House of Islam.”)

For further resources regarding ministry to Muslims, see the section on this site, Evangelism to Muslims, here