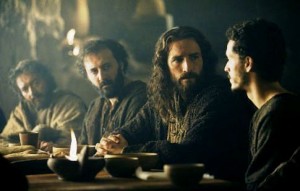 Passover Meal
I will begin at what is considered the starting point of the passion of the Christ, that of the Passover meal that he shared with his disciples. (Mark 14:12; Luke 22:7; Matt 26:17; John 19:14; 18:28) (I realize that some scholars include also Jesus’ entry into Jerusalem, but I will not cover that event in this series) The Passover meal was the beginning of Christ’s cosmic suffering, as he was already foretelling the future events that would shortly come to pass that would bring about his physical and cosmic suffering, eventually leading to his death:

We can become familiar with the story of the Passover Meal, or as it has now been named, the Last Supper, and thereby miss the agony that Jesus must have felt while dining with his disciples. These were his trusted friends and companions, those that he was entrusting to fulfill his Great Commission via the power of the Holy Spirit, and become his “witnesses in Jerusalem and in all Judea and Samaria, and to the end of the earth.” (Acts 1:8; Matt. 28:18-20) These were his disciples, those who had lived with him for over three years, who had witnessed his miracles; power over nature, healing, raising the dead, etc. Peter, James and John had been privileged to witness the Transfiguration—they knew he was the Christ. (Matt. 16:13-16) And yet, Jesus knew that they would all forsake him in the following hours. It was also considered the height of disloyalty and betrayal to share a meal with a friend before betraying him. It was a sign of trust and friendship when one sat down to dine with others, therefore Judas’ betrayal was all the more pronounced.

Garden of Gethsemane
Jesus was arrested around mid-night in the Garden of Gethsemane. (Matthew 26:36-46 Luke 22:39-46 Mark 14:32-42) Prior to the arrest, we see that the cosmic suffering began to manifest itself physically. “Then Jesus went with them to a place called Gethsemane, and he said to his disciples, “Sit here, while I go over there and pray.” And taking with him Peter and the two sons of Zebedee, he began to be sorrowful and troubled. Then he said to them, “My soul is very sorrowful, even to death…” (Matthew 26:36-38)

Here we see the frightened Jesus fall on his face, begging God to take away the cup of suffering. This is not the stuff of pious fiction or dogma. Indeed, it stands in stark contrast to the serene Jesus portrayed in John 17, where he communes with God in peace, prays for his disciples, and adds a prayer for all those who will follow after him. [1] He prayed three times that, if possible, the death he knew he was to undergo might be halted, but in the end he was in complete subjection to the Father’s will. D. A. Carson explains the magnitude and cosmic effects of Christ’s submission stating:

In the first garden ‘Not your will but mine’ changed Paradise to desert and brought man from Eden to Gethsemane. Now ‘not my will but yours’ brings anguish to the man who prays it but transforms the desert into the kingdom and brings man from Gethsemane to the gates of glory.[2] 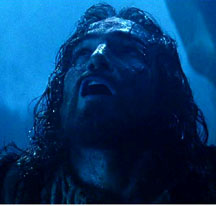 The extent of Jesus’ sorrow and anxiety was manifested physically in his perspiring of “great drops of blood”— And being in an agony he prayed more earnestly; and his sweat became like great drops of blood falling down to the ground. (Luke 22:42-44) Although this physical condition is only included in Luke’s Gospel, this is certainly understandable considering he was a physician by profession and would have been more concerned than the other Gospel writers in reporting this detail of the eyewitness accounts of the disciples. It is hard to see how a story such as the Gethsemane prayer could circulate and find its way into the Gospel tradition if it were not based on solid, credible eyewitness testimony. It would simply be too risky for Jesus’ identity if it were not true. [3] It should be noted that scholars date the writing of Luke’s Gospel between the late 40’s or early 50’s AD. Luke makes it clear at the beginning of his Gospel that he has “undertaken to compile a narrative of the things that have been accomplished among us, just as those who from the beginning were eyewitnesses and ministers of the word have delivered them to us.” (Luke 1:1-4) If Luke had used his ‘literary license’ to embellish the Gethsemane account by including ‘bloody sweat’ point, the other disciples would have certainly corrected him for doing so.

Luke 22:44 says that Jesus was in agony (Greek: agōnia—of severe mental struggles and emotions, agony, anguish) in anticipation of bearing “our sins in his own body on the tree” (1 Pet. 2:24) There are both ancient and modern accounts on record of people sweating blood, a condition known as hematidrosis, where extreme anguish or physical strain causes one’s capillary blood vessels to dilate and burst, mixing sweat and blood. This condition, hematidrosis, is a rare dermatologic disorder that can occur in an individual subjected to server mental distress and is the result of hemorrhaging into the sweat glands.

Forensic pathologist Frederick Zugibe in his book, The Crucifixion of Jesus: A Forensic Inquiry, states:

During the first phase of his journey, in the Garden of Gethsmene, the hematidrosis illustrates that severity of Jesus’ mental suffering, an area that is generally not generally recognized when contemplating His pain. The effects of hematidrosis and the severe anxiety associated with it, are general weakness, depression, mild to moderate dehydration, and mild hypovolemia (low blood and fluid volume) due to sweat and blood loss—all which would have greatly weakened Jesus prior to his crucifixion.[4]

This historical fact, as recorded by Luke, has met with attempts to refute or relegate it to hyperbole by some critics. However, Dr. C. Truman Davis asserts that, “Every attempt imaginable has been used by modern scholars to explain away the phenomenon of bloody sweat, apparently under the mistaken impression that it simply does not occur. A great deal of effort could be saved by consulting the medical literature.” Although quite rare, Dr. Davis affirms that “the phenomenon of hematidrosis, or bloody sweat, is well documented. Under great emotional stress, tiny capillaries in the sweat glands can break, thus mixing blood with sweat.”

Dr. Gerald H. Bradley, M.D. asserts that it involves “causing great weakness”, while Dr. Davis adds that it may produce “possible shock”. During this process, “as a result of hemorrhage into the sweat glands, the skin becomes fragile and tender.” As for the extent of damage, “Jesus’ actual blood loss probably was minimal. However, in the cold night air, it may have produced chills” [5] Under careful observation, Christ’s condition of hematidrosis can be shown as valid, given the sweat was actually blood.

When reflecting on the cosmic suffering, psychic torment, and extreme anxiety, and yes, even depression that Jesus of Nazareth experienced, even before the physical suffering began, we can only begin to scratch the surface of a realization of what he was willing to undergo because of the Father’s and his great love for each of us. In fact, as finite human beings, we can only venture to imagine the magnitude of Christ’s cosmic suffering. The full realization will come when we see him face to face in the eternal abode that he has prepared for us, “when the perfect comes, [and] the partial will pass away…For now we see in a mirror dimly, but then face to face. Now I know in part; then I shall know fully, even as I have been fully known.” (1 Cor. 13:9-12)

William A. Dembski does his best to conceptualize the reach of the Cross and extent of Christ’s suffering when he states:

In the Cross, the eternal Son of God enters fully into the human condition, takes on himself the totality of human sin and pain, and once and for all extinguishes the power of evil over our lives. To accomplish so great a salvation, Christ paid the ultimate cost, undergoing rejection, humiliation, physical torture, psychic torment, and death. Out of love for humanity, he laid down his life for ours, thereby securing our redemption. And the, through his Resurrection, he defeated death and gave us eternal life. As the ancient Easter hymn exults:

Christ is risen from the dead,
Trampling down death by death,
And upon those in the tombs,
Bestowing life!

Truly, there is not greater suffering or triumph of love than Christ’s sacrifice for us on the Cross.[6]

In part 2, I will address how the cosmic suffering continues after Jesus’ arrest and throughout his trials.

Jesus Praying in the Garden of Gethsemane