The Deity of Christ-addressing common objections

People today have a number of common objections to, or intellectual difficulties with, the issue of the deity of Christ. The following is several of what I consider the most common objections, although there are certainly others. It is important for us as Christian case-makers to understand first of all, the objections to the Christian worldview, in order to know how to address or refute such objections. In other words, “if you don’t understand the question, how will you be able to give an answer?” The same applies to objections–if we misunderstand the objection, we’ll just end up talking past each other, or even giving the wrong response, which will weaken our witness to those who pose, or are struggling with, intellectual difficulties. So let’s begin.

“The Father is Greater than I”
“Jesus said, ‘. . . the Father is greater than I’ ” (John 14:28). “Surely that demonstrates Christ’s position as somehow lesser than God” is one difficulty commonly raised. In saying that the Father is greater than I, Jesus means that the Father as the one who sends and commands is “greater” (in authority or leadership) than the Son. However, this does not mean that Jesus is inferior in His being and essence to the Father, as John 1:1, 10:30, and 20:28 clearly show. Therefore, Jesus’ words that the Father was greater referred to His temporary position, not to His being.[1]
Jesus spoke these words after He humbled Himself and became a servant (Phil. 2:5-8). Furthermore, the word “greater” refers to office or position and not nature. God is God because of His “nature or essence” (Gal. 4:8). This is how the word “greater” is used as clearly seen in Gen 41:40. That verse reads, “You [Joseph] shall be in charge of my palace, and all my people are to submit to your orders. Only with respect to the throne will I [Pharaoh] be greater than you,” (NIV). Pharaoh was “greater” than Joseph only by office or position, but not nature. The nature of Pharaoh and Joseph was the same, that is, human being.

“Jesus never explicitly states that He is God.”
Here is where the self-understanding of Jesus and the Christological titles He used in ‘referencing’ Himself must be employed in refuting this objection. It would be fallacious to confine Jesus in this way by forcing Him to say in such concise terms what He claims about Himself, especially in light of all the scriptural evidence—Isaiah 9:6-7, 10:21, Mark 14:62-65, John 1:1-18, 5:2-18, 8:58, 20:28, etc. There are many things He did not explicitly say (such as being the Messiah), yet there is no doubt that He thought of Himself in these terms. Also, the fact that He accepts others who call Him God and worship Him (rather than rebuking them, which would be what He should have done if He is just a prophet or an angel) show that He definitely thought of Himself this way.

Obviously, Jesus of Nazareth didn’t go about Palestine introducing himself to people as God. The Gospels do not portray him in such a way, nor is it consistent with the Christian doctrine of the incarnation, which holds that Jesus as a man had an ordinary human consciousness, even if it was supernaturally informed. Rather Jesus’ divine self-understanding is evident explicitly in the Christological titles He used by way of self-reference and implicitly by His teaching and behavior.[2]

“When Jesus died on the cross, did God die? And if He did, who was running the world while He was dead?” 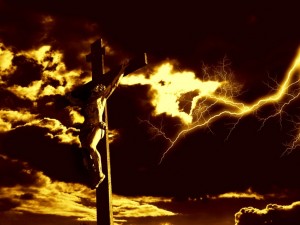 Those who pose this objection are forgetting two key points:

First—Jesus is both fully human and fully divine. When He died on the cross, this means that His Divine spirit was temporarily separated from His human body until the Resurrection. This does not mean He ceased to exist, however. This exposes an inconsistency on the part of those who raise this argument. The Christian view is that Christ died in his human nature, that is to say, Christ’s human nature died. He obviously did not die in his divine nature. The person who was from all eternity the second person of the Trinity didn’t cease to exist between the crucifixion and resurrection. God is, after all, a necessary being and so cannot cease to exist. It is a mistake to think either that one member of the Trinity was somehow deleted when Christ died or that Christ’s human soul ceased to exist when he died. What happened is that his soul was separated from his body. The difference between what happened to Christ’s human nature and what will happen to ours someday is that God the Father re-united Christ’s soul with his body in advance of the general resurrection and raised Jesus to glory and immortality as the harbinger and guarantor of our own resurrection.[3]

Second—The question being posed assumes a form of Modalism, which makes Jesus the entirety of the Godhead. Remember that it was not the Father or the Holy Spirit that became incarnate, only the Son.

Jesus Was “Begotten” and/or “created” and therefore is not eternal

Some people maintain that the term “only begotten” in John 3:16 (also 1:14, 18; 3:18) denies Jesus’ divinity, implying that He was only another created being. However, this is because of a misunderstanding and/or misinterpretation of the word “begotten” both by definition as well as theologically.

Therefore, if Jesus is said to be the begotten Son of God, then Jesus has the same nature as the Father. If Jesus has the same nature as God the Father, then Jesus is divine and eternal as well. If he is eternally God, then there was never a time he was literally begotten–which is why we know the language is figurative to describe his nature, and not his beginning. To call Jesus “the only begotten Son” means that He is fully divine and eternal. He is God the Son. This is why the creed says that Jesus was “begotten, not made.” Why? Because He is of one substance with the Father.
Theologically: I will include here the exposition of early Church father, Athenagoras, who gives an answer to the objection: 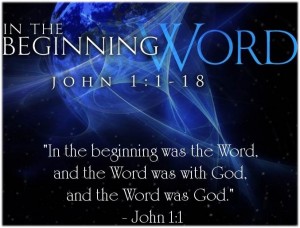 “The Son of God is the Word of the Father in Ideal Form and energizing power; for in his likeness and through him all things came into existence, which presupposes that the Father and the Son are one. Now since the Son is in the Father and the Father in the Son by a powerful unity of Spirit, the Son of God is the mind and reason of the Father… He is the first begotten of the Father. The term is used not because he came into existence (for God, who is eternal mind, had in himself his word or reason from the beginning, since he was eternally rational) but because he came forth to serve as Ideal Form and Energizing Power for everything material… The… Holy Spirit. . . we regard as an effluence of God which flows forth from him and returns like a ray of the sun.” (A Plea for the Christians 10).

According to this doctrine, then, there is one God, but He is not an undifferentiated unity. Rather certain aspects of His mind become expressed as distinct individuals.

Therefore, the Logos doctrine of the Apologists involves a fundamental reinterpretation of the Fatherhood of God: God is not merely the Father of mankind or even, especially, of Jesus of Nazareth, rather He is the Father from whom the Logos is begotten before all worlds. Christ is not merely the only-begotten Son of God in virtue of his Incarnation; rather he is begotten of the Father even in his pre-incarnate divinity. This view becomes enshrined in the Nicene Creed as orthodoxy.

Jesus Had Limited Knowledge
As a human being, Jesus had limited knowledge. Speaking of His second coming, Jesus said in Mark 13.32: “But of that day or that hour no man knows, not even the angels in heaven, nor the Son, but only the Father.” This is an authentic saying of the historical Jesus because the later Church, which regarded Jesus as divine, would never have invented a saying ascribing limited knowledge or ignorance to Jesus. But here Jesus says he doesn’t know the time of his return. So what do we learn from this saying? It not only reveals Jesus’ consciousness of being the one Son of God, but it presents us with an ascending scale from men to the angels to the Son to the Father, a scale on which Jesus transcends any human being or angelic being.

On the other hand, Jesus clearly knew all things. (John 2:25; 16:30; 21:17) Now this is only understandable if Jesus learned things and had limited knowledge with respect to his human nature but was always omniscient with respect to his divine nature, and therefore he was able any time to “call to mind” whatever information would be needed for his ministry. In this way, we can understand Jesus’ statement concerning the time of his return. This ignorance of the time of his return was true of Jesus’ human nature and human consciousness only, for in his divine nature he was certainly omniscient and certainly knew the time when he would return to earth. At this point someone may object that if we say that Jesus had two centers of consciousness and two wills, that requires that he was two distinct persons, and we have really fallen into the error of “Nestorianism.”

But in response, it must simply be affirmed that two wills and two centers of consciousness do not require that Jesus be two distinct persons. It is mere assertion without proof to say that they do. If someone responds that he or she does not understand how Jesus could have two center of consciousness and still be one person, then that fact may certainly be admitted by all. But failing to understand something does not mean that it is impossible, only that our understanding is limited. The great majority of the Church throughout its history has affirmed that Jesus had two wills and centers of consciousness, yet He remained one person.

In the human sphere, this is certainly true of our conversation as well. If I type a letter, even though my feet and tows had nothing to do with typing the letter, I do not tell people, “My fingers typed a letter and my toes had nothing to do with it” (though that is true). Rather, I tell people, “I typed a letter.” That is true because anything that is done by one part of me is done by me. Thus, “Christ died for our sins” (1Cor. 15:3). Even though actually only his human body ceased living and ceased functioning, it was nonetheless Christ as a person who died for our sin. This is simply a means of affirming that whatever can be said of none nature or the other can be said of the person of Christ.

For further reading on this topic see the following article:
The question: Why was Jesus crucified? ‘What think ye of Christ? Whose son is he?’-Matt. 22:42

Yusuf Estes and the Trinity: Common Objections, Quick Reply
Here are very common Islamic objections to the deity of Christ, with quick responses any Christian can offer.

The Deity of Christ in the New Testament