I am in the process of studying the new book by Os Guinness, Fool’s Talk: Recovering the Art of Christian Persuasion, and have found it to be a vital addition to my apologetic library. I highly recommend this book to all those who are interested in becoming a more effective witness through ‘recovering the art of Christian persuasion.’

In the introduction, Dr. Guinness offers his assessment of where the church stands in our post-modern, post-Christian world, and the need to rethink and/or realign apologetics and evangelism in the way in which they were intended to be used, as complimentary tools of persuasion to bring growth to the Kingdom of Christ. The following are introductory excerpts from the book: 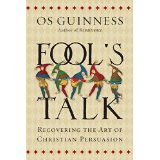 “What does “the grand age of apologetics” mean for us as followers of Jesus? The full scope of this overall task is far larger than my particular concern in this book. But on the one hand, our age is quite simply the greatest opportunity for Christian witness since the time of Jesus and the apostles, and our response should be to seize the opportunity with bold and imaginative enterprise. If ever the “wide and effective door” that St. Paul wrote of has been reopened for the gospel, it is now. On the other hand, we have to face up to the many challenges of the new age of communication with realism, for there are oddities in the age of communication that make it actually harder to communicate well today, rather than easier. And we also have to face the fact that the global era has shown up weaknesses in our present approaches to sharing the faith that must be remedied— above all because many attempts at Christian apologetics have been caught in the turbulent wake of the massive crossover between the grand philosophies of modernism and postmodernism…In short, many of us today lack a vital part of a way of communicating that is prominent in the Gospels and throughout the Scriptures, but largely absent in the church today— persuasion, the art of speaking to people who, for whatever reason, are indifferent or resistant to what we have to say. They simply do not agree with us and are not open to what we have to say. Loss of persuasion? It might seem bizarre, almost unimaginable, that Christian communication has lost something so central to its mission . Yet in profound ways it has, and that is why our challenge is to think about apologetics in ways that are not only fresh but faithful and independent— faithful in the sense that they are shaped by the imperatives of Christian truths, and independent in the sense that they are not primarily beholden to ways of thinking that are alien to Christian ways of thinking. That is why this book is not only about the lost art of Christian persuasion. It is also about an “advocacy of the heart,” an existential approach to sharing our faith that I believe is deeper and more faithful as well as more effective than the common approaches used by many. Christian advocacy has had many conversation partners down the centuries—particularly the great tradition of classical rhetoric established by the Greeks and the Romans. It has also had many opponents and sparring partners—most recently the bracing challenge of the new atheists. But for all the undoubted benefits of these challenges, one of the more unfortunate side effects is that much apologetics has lost touch with evangelism and come to be all about “arguments,” and in particular about winning arguments rather than winning hearts and minds and people. Our urgent need today is to reunite evangelism and apologetics, to make sure that our best arguments are directed toward winning people and not just winning arguments, and to seek to do all this in a manner that is true to the gospel itself…I will argue that there is no one we cannot talk to, however hostile to and distant from the gospel, but that this is precisely because we can count on the distinctive truths of the gospel itself— and therefore that our approach is independent in the sense of being decisively Christian and not neutral between belief and unbelief. This vision of Christian advocacy as “the art of Christian truth and of Christian truths” is the core of the lost art of persuasion we shall be exploring.”

I also recommend the following apologetic/evangelism resources that speak to the same issues as are raised in the above mentioned book, that of effectively communicating the Christian worldview within today’s cultural milieu via the ‘art of Christian persuasion’:

What is the Role of Apologetics in Evangelism–William Lane Craig