Historicity of the Crucifixion & the Law of Non-contradiction

According to the law of non-contradiction, two propositions are contradictory if they both affirm and deny the same thing, at the same time, and in the same sense or in the same relationship. Now let’s put this law to the test:

In the Quran, it states that:

In the Bible (New Testament) it states that: 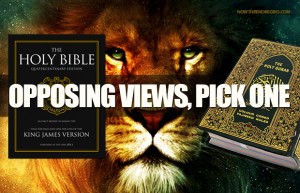 Obviously, these two accounts cannot both be true—either Jesus was crucified or he was not. So which is the true account? The Quran states that the testimony of the eye witnesses to the crucifixion gave a false account because they had “no definite knowledge thereof, but only follow a conjecture; and they did not convert this conjecture into a certainty.” But how can a group of more than 11 eye witnesses (and more than 500 to the resurrection) have ‘no definite knowledge’ and only be found to ‘follow a conjecture?’ The obvious answer is—they cannot!

One of the ‘sources’ that Islam uses to affirm the Quran’s account of the crucifixion is the medieval legendary ‘gospel,’ and/or myth, called the Gospel of Barnabas. As we have seen already, contrary to the Bible, the Qur’an teaches that Jesus was not crucified and did not die on the cross. In the Gospel of Barnabas we see that its author has altered the New Testament’s, eye-witness account of Jesus’ crucifixion, to conform with what the Qur’an says:

God acted wonderfully, insomuch that Judas was so changed in speech and in face to be like Jesus. The soldiers took Judas and bound him … So they led him to Mount Calvary, where they used to hang malefactors, and there they crucified him (chap. 216-217).

The Gospel of Barnabas is not an authentic gospel of Jesus. The Gospel of Barnabas has a multitude of errors in regards to the language, history and geography pertaining to the 1st century A.D., not to mention that there is no ancient evidence for the book. One of the many glaring errors is as follows:

Jesus went to the sea of Galilee, and having embarked in a ship sailed to his city of Nazareth. … Having arrived at the city of Nazareth the seamen spread through the city all that Jesus wrought (done) … (then) Jesus went up to Capernaum (chaps. 20-21).

The major geographical error in this account is that the town of Nazareth was not a fishing village. It was located about 14 km from the sea of Galilee and situated in the hills of a mountain range! Capernaum was the fishing village that Jesus arrived at with his disciples, not Nazareth. Nazareth and Capernaum were two towns which Jesus often visited with his disciples, therefore any disciple of Jesus would know these towns well. (This is affirmed again and again in the New Testament Gospels which are geographically and historically accurate.) Obviously, the author of this ‘gospel’ does not have his geographical, nor historical facts, straight. This casts doubt over the claim that he was a disciple of Jesus or that he ever lived in that region. The internal evidence of the book suggests it was written in the 14th century, and there are Muslim scholars who agree with this dating. (For more on the Gospel of Barnabas, click here)

It is interesting to note that a number of claims in the Gospel of Barnabas are also contradictory to the Qur’an, which the following points attest too:

Allah giveth thee glad tidings of a word from him, whose name is the Messiah, Jesus, son of Mary (Qur’an 3:45, Pickthall).

Jesus confessed and said the truth, “I am not the Messiah”. (chap. 42). Then said the priest: “How shall the Messiah be called?” … (Jesus answered) “Muhammed is his blessed name” (chap. 97). Both of these ideas contradict the Qur’an.

Marriage in the Qur’an binds a woman to one man but it does not bind a man to one woman. Muslim men are free to have several wives (Qur’an 4:3) and an unlimited number of female servants (Qur’an 70:30). However, the Gospel of Barnabas teaches the Biblical idea of marriage, that marriage binds a man and a woman equally together:

Let a man content himself therefore with the wife whom his creator has given him, and let him forget every other woman (chap. 115).

The Birth of Jesus. The Qur’an clearly teaches that Mary had pain when she gave birth to Jesus:

(A)nd she withdrew with him to a far place. And the pangs of childbirth drove her unto the trunk of the palm tree. (Qur’an 19:22-23, Pickthall)

However, the Gospel of Barnabas teaches the opposite: The virgin was surrounded by a light exceeding bright, and brought forth her son without pain (chap. 3).[1]

In his book, The Authenticity of the Gospel of Barnabas, Islamic scholar Ibn Yasin states, “The Jesus of Islam is a prophet, the Messiah to the Christian of Israel and the recipient of the Injil from Allah whereas the Jesus of the Gospel of Barnabas is not the recipient of the Injil but encourages Barnabas to write his gospel. He is also a prophet who announces the coming of Mohammad as well as clarifying and explaining different theological issues. This demonstrates that the Jesus portrayed in the gospel is vastly different than that mentioned in the Islamic scriptures. As such the gospel cannot be claimed to be the Injil of Jesus as the message and content of the gospel in regard to Jesus is considerably alien to Islam in so many respects.”[2]

It would seem that the attempt of the author to create an Islamic apologetic via the Gospel of Barnabas (he certainly was not a scholar of either Christian or Islamic theology) to disprove the crucifixion of Jesus has been discredited by both Christian and Islamic sources, and as such, should be placed in the literary genre of historical fiction.

William Lane Craig offers the following assessment of the historical veracity of Jesus’ crucifixion and compares the New Testament, eye witness narratives, with the one presented in the Quran:

“Perhaps the single most egregious historical error found in the Qur’an is its claim that Jesus was not in fact crucified. Not only is there not a single shred of evidence in favor of this remarkable hypothesis, but the evidence supporting Jesus’ crucifixion is, as Johnson says, “overwhelming.” Those of you who are Muslims need to appreciate that no one who is not already a Muslim believes that the historical Jesus was not crucified. The crucifixion of Jesus is recognized even by the skeptical critics in the Jesus Seminar as–to quote Robert Funk–”one indisputable fact.”[3] Indeed, Paula Frederickson, whose book From Jesus to Christ inspired the PBS special by the same name, declares roundly, “The crucifixion is the strongest single fact we have about Jesus.”[4]

In summary, on purely historical grounds, we have seen:
(1) that Jesus of Nazareth possessed a radical self-concept as the unique Son of God and the Son of Man,
(2) that he was tried, condemned, and crucified for his allegedly blasphemous claims, and
(3) that God raised him from the dead in vindication of those claims.

All this is in contradiction to the Qur’an’s claims that Jesus thought of himself as a mere prophet preaching a blasé monotheism, that he was not crucified, and that he did not rise from the dead.

When you think about it, however, this situation isn’t really surprising. I mean, which would you trust: documents written down within the first generation of the events they record, while the eyewitnesses were still alive, or a book written over 600 years after the events with no independent, historical source of information? Why, even to ask the question is to answer it!

In fact, the Qur’an contains demonstrably legendary stories about Jesus which evolved during the centuries after his death. I’m referring to stories about Jesus which are found in the so-called apocryphal gospels–these are forgeries which appeared in the second and third centuries after Christ–and which the Qur’an unwittingly repeats as facts. For example, the Qur’an mentions the story–borrowed from the legendary forgery entitled The Infancy Gospel of Thomas–of how the boy Jesus made a bird out of clay and then made it come to life (III.70, V.100-110). Such stories are fictional. Thus, the Qur’an offers us no independent historical source for Jesus.

Historically speaking, then, the answer to the question before us seems clear: the real Jesus is the person described in the New Testament, not the legendary fabrication we read about in the Qur’an.” [5]

Footnotes:
[1] Samuel Green, The Gospel of Barnabas, here
[2] Ibn Yasin, The Authenticity of the Gospel of Barnabas, 2011, here
[3] Jesus Seminar tape
[4] Paula Frederickson, remark during discussion at the meeting of “The Historical Jesus” section at the annual meeting of the Society of Biblical Literature, November 22, 1999.
[5] William Lane Craig, Who Is The Real Jesus: The Jesus Of The Bible Or The Jesus Of The Qur’An?, http://www.reasonablefaith.org/who-is-the-real-jesus-the-jesus-of-the-bible-or-the-jesus-of-the-quran

If the Quran Is True, Then It’s False–Tim Barnett–Stand to Reason

There is a problem here that Christians and Muslims both recognize: The New Testament conflicts with the Quran on a number of central doctrines. The Christian, who takes Mohammed at his word and judges the Quran by the New Testament, is forced to conclude that Mohammed got it wrong.

What does the Muslim say to this? The Muslim’s answer is quite simple. The Quran is God’s infallible, uncorrupted word; therefore, “the Gospel” must have been corrupted. Here’s the unstated presupposition: If the New Testament differs with the Quran, then it’s the New Testament that must have it wrong.

However, when the words of the Quran were being written down, Mohammed was communicating that the New Testament and the Old Testament are reliable. In his words, they are “sent” from Allah, they “confirm” each other and contain “guidance and light.” So up until that time in history, “the Gospel” and “the Law” that Mohammed was working from were not corrupted. If they were already corrupted, then his words don’t make any sense. He wouldn’t ask Christians to judge anything by a corrupted book. This leads us to conclude that the corruption must have taken place after the Quran was written (620–632 AD).

Here’s the problem, and it’s a big one. The manuscript evidence we have gathered from after the Quran was written completely agrees with the manuscript evidence we have from before the Quran was written. That is to say, the New Testament around at the time of Mohammed is identical to the text we have today. [Emphasis mine.] (For complete article, click here)

The Gospel of Barnabas Exposed--Nabeel Qureshi