Is religion the cause of most wars? 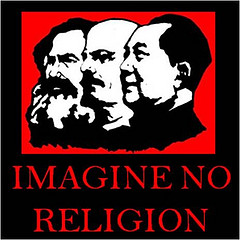 Is religion the cause of most wars? Well, according to Sam Harris and Richard Dawkins, avowed proponents of the New Atheism (nothing new about the substance, just voiced in a new and vitriolic tone), the answer is yes, religion is the cause of most wars. Harris states that religion is, “the most prolific source of violence in our history” (The End of Faith page 27). Not to be outdone, Richard Dawkins offers the claim that, “There’s no doubt that throughout history religious faith has been a major motivator for war and for destruction.” When one hears such ‘truth’ claims being propounded, a simple, but yet, profound question must be asked, “is that true?” Sad to say, most people don’t take the time to ask this simple three word question when hearing such supposed truth claims.

I thought it would be interesting to take Harris and Dawkins’ claims, and ask the question, “but is that true?” and then follow the evidence were it leads. The following are a list of facts (not rhetoric) that help to bring Harris and Dawkins supposed truth claim out of the darkness and into the light:

 In 5 millennia worth of wars—1,763 total—only 123 (or about 7%) were religious in nature (according to author Vox Day in the book The Irrational Atheist).
 If you remove the 66 wars waged in the name of Islam, it cuts the number down to a little more than 3%.
 A second scholarly source, The Encyclopedia of War edited by Gordon Martel, confirms this data, concluding that only 6% of the wars listed in its pages can be labelled religious wars.
 William Cavanaugh’s book, The Myth of Religious Violence, exposes the “wars of religion” claim.
 a recent report (2014) from the Institute for Economics and Peace further debunks this myth.
 A strong case can be made that atheism, not religion, and certainly not Christianity, is responsible for a far greater degree of bloodshed. Indeed, R.J. Rummel’s work in Lethal Politics and Death by Government has the secular body count at more than 100 million…in the 20th century alone. 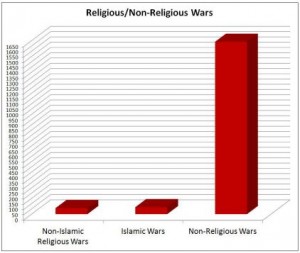 Atheist and anthropologist, Scot Atran, in his book, God and the Ivory Tower, offers the following summary on the issue, “Moreover, the chief complaint against religion—that it is history’s prime instigator of intergroup conflict—does not withstand scrutiny. Religions issues motivate only a small minority of recorded wars. The Encyclopedia of Wars surveyed 1,763 violent conflicts across history; only 123 (7 percent) were religious. A BBC-sponsored “God & War” audit, which evaluated major conflicts over 3,500 years and rated them on a 0-5 scale for religious motivation (Punic Wars=0 Crusades=5), found that more than 60% had no religious motivation. Less than 7% earned a rating greater than 3. There was little religious motivation for the internecine Russian and Chinese conflicts or the world wars responsible for history’s most lethal century of international bloodshed.” 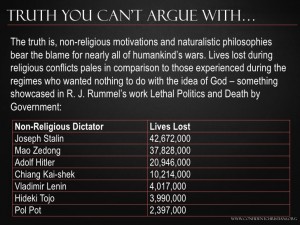 The conclusion: between 6-7% of all wars have been religious in nature. (the Islamic dynamic set aside) When you consider that the body count that has been tallied in the 20th century under atheist/naturalist/Darwinian evolution promoting governments has come to over 100 million, one has to ask, “what ideology is truly the driving force behind the vast majority of wars waged by humanity?” The evidence does seem somewhat conclusive, doesn’t it?

There is no arguing that religion has been the cause of war and violence on occasion, but it is a gross overstatement, exaggeration and distortion of the facts to say that “the most prolific source of violence in our history” has been “religious faith.” Obviously, Harris and Dawkins are not historians, nor have they consulted the experts in the field of history.

The Bible is specific as to the cause of war, that of the “lust of the flesh, the lust of the eyes and the pride of life,” which James sums up in his epistle: “From whence come wars and fightings among you? come they not hence, even of your lusts that war in your members? Ye lust, and have not: ye kill, and desire to have, and cannot obtain: ye fight and war, yet ye have not, because ye ask not. Ye ask, and receive not, because ye ask amiss, that ye may consume it upon your lusts.” James 4:1-3

Jesus gave us the antidote to lust, and as such, wars:

“You have heard that it was said, ‘An eye for an eye and a tooth for a tooth.’ But I say to you, Do not resist the one who is evil. But if anyone slaps you on the right cheek, turn to him the other also. And if anyone would sue you and take your tunic, let him have your cloak as well. And if anyone forces you to go one mile, go with him two miles. Give to the one who begs from you, and do not refuse the one who would borrow from you. “You have heard that it was said, ‘You shall love your neighbor and hate your enemy.’ But I say to you, Love your enemies and pray for those who persecute you, so that you may be sons of your Father who is in heaven. (Matthew 5:38-45 ESV)

Stand to Reason radio podcast, “Christianity the cause of most wars? Nope,” by Greg Koukl–found, here

Resource for the above article:
Is Religion the Cause of Most Wars?–Brett Kunkle–article, here