The Cause of it all—what is it? or Who is it?

Think or meditate on the following:

Now let’s put each of these points to the test.

#1—Have you ever seen or do you know of anything that began to exist without a cause? Really? Kindly identify it for me. Go ahead—give it your best shot… that’s what I thought, your list of such ‘uncaused’ entities is rather short, in fact you don’t have one item to even begin your list because there is nothing in the universe that has, or can begin to exist, without a cause.[2] 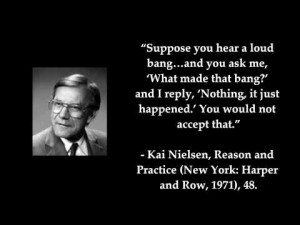 Ok, on to #2—the majority of astrophysicists/cosmologists agree that the universe came into existence at a finite moment, a creation event commonly referred to as a singularity, or the Big Bang. Scientific advancements since the 1950’s have continued to confirm this Big Bang event in which all matter, energy, space & time came into being. Although other theories have been put forth, in an effort to refute the overwhelming evidence of this finite, creation event, each has been proven weak at best & fallacious at their worst, not being based on the scientific evidence that we have available to us today. As world renowned philosopher William Lane Craig states, “There is no other theory of the origin of the universe which is as mathematically consistent or as confirmed by the evidence as the standard big bang theory.”[3]

Which brings us to #3—“therefore the universe has a cause of its existence”— which if premise #1 & #2 are true, must be true as well.

Ok, now we have established that the universe has a cause. What is that cause? Well, it must be something that is outside of the universe and the realm of our finite existence in order to cause or create the universe as the universe could not have created itself, contrary to certain fallacious hypothesis put forth by some. The universe is all of space time reality—all matter & energy. This being the case, it follows that if there is going to be an explanation of time, matter & energy, the cause of the universe must be a being or force that is nonphysical & immaterial in its nature—a being of intelligence or force that transcends time & space. There are only two objects that can fit that description, either abstract objects such as numbers; or, an unembodied mind. Abstract objects do not stand in causal relation to anything, so the cause of the universe must be a transcen¬dent, necessary, uncaused, timeless, spaceless, immaterial, personal creator of the universe.

Who then is this unembodied, yet personal Mind, this creative Force that lives outside of our temporal reality & existence? The One who created such a complex universe and the earth upon which we live, a place so intricately designed, that scientists have to date discovered 824 design traits that are necessary to sustain such life?

As philosopher Richard Swinburne concluded, “…a first state of the universe cannot have a scientific explanation, since there is nothing before it, and therefore it cannot be accounted for in terms of laws operating on initial conditions. It can only be accounted for in terms of an agent and his volitions, a personal explanation…”[4] The first Cause of all things, the ‘agent and his volitions’ referred to here, is the personal and loving God found in the very first line of the Bible, “In the beginning, God created the heaven and the earth.”[5] Upon finishing the creation of all things within the universe, the creation narrative states, “God saw all that he had made, and it was very good. Thus the heavens and the earth were completed in all their vast array.”[6]

One more thought—if you are contemplating the question, “but who made God?” you have just committed a logical fallacy known as the category fallacy. To say that all things, even God, must be caused is incoherent—like the question, “how does the color green taste?” When we rephrase the question to say, “What caused the self-existent, uncaused Cause, who is by definition unmade, to exist?” the answer is obvious.[7] 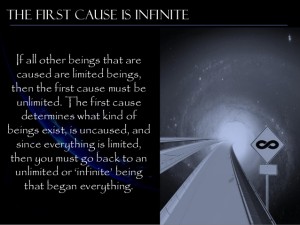 Having read and thought on the argument presented here for God’s existence, the majesty of free choice is now before you. Fifteenth century French mathematician, physicist, and Christian philosopher, Blaise Pascal likened the decision or choice to a wager and stated, “God is, or He is not…You must wager [make the decision]…it is not optional. Wager, then, with¬out hesitation that He is…There is here an infinity of an infinitely happy life to gain, a chance of gain against a finite number of chances of loss, and what you stake is finite.”[8]

Won’t you make the wager? Going “all in” in wagering your finite life, heart and mind, for that which is eternal? Surely it is worth the “gamble” to win the ultimate prize of a direct connection and personal relationship with the personal God who created it all, both in this life and the life to come. As Christian missionary Jim Elliot so aptly put it, “He is no fool who gives what he cannot keep, to gain that which he cannot lose.” The following is how to make your wager—my prayer is that you do:

“I come before you now, the personal God who created both the heavens and the earth, acknowledging my need for you, my Creator. I acknowledge you, Jesus, as the Truth, the Way and the Life, the one who came to this earth and paid the ransom for my sins through your death and resurrection. I turn to you now, Jesus, and ask for your forgiveness for my wrongdoing, and I invite you into my heart and life, that I may be transformed through your gift of eternal life that you have promised to all those who call upon and receive you. Illuminate my mind and open it to your truth so that I may understand and know you and the reason and purpose for my life. Thank you Jesus, for the gift of eternal life, and for revealing yourself to me.”—to all who received him, to those who believed in his name, he gave the right to become children of God…I stand at the door and knock. If anyone hears my voice and opens the door, I will come in to them.—John 1:12; Rev. 3:20

References:
1 The Kalām cosmological argument is a variation of the cosmological argument that argues for the existence of a personal First Cause for the universe. Its origins can be traced to both medieval Christian and Muslim thinkers, but most directly to Islamic theologians of the Kalām tradition. Its most contemporary proponent is William Lane Craig. For more on the Kalam cosmological argument go to: www. reasonablefaith.org
2 Some have argued that quantum physics disprove that “something cannot come out of absolutely nothing.” The example of virtual particles is often posited—however, virtual particles do not come out of nothing—the vacuum in which they are seen is not nothing, it is a sea of fluctuating energy endowed with a rich physical structure, governed by physical laws—so it does constitute an explanation of these virtual particles—they are fluctuations of the energy in the vacuum.
3 William Lane Craig, Doctrine of Creation podcast: www. reasonablefaith.org
4 Craig/Sinclair; Blackwell Companion to Natural Theology, pp. 1923
5 The Bible—Genesis 1:1
6 The Bible—Genesis 1:31; 2:1
7 Paul Copan, If God Made the Universe, Who Made God?, 2012, pg. 38
8 Blaise Pascal; excerpts from Pensées, part III, note 233

The Kalam Cosmological Argument–from Reasonable Faith (For more videos on the arguments for the existence of God, here.)